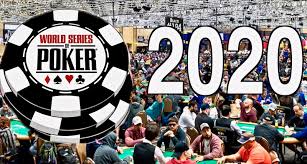 World Series of Poker Announces 15 Events for Its 2020 Contest

World Series of Poker Announces 15 Events for Its 2020 Contest

Fans of poker have a very exciting 2020 ahead of them. The World Series of Poker, the biggest yearly competition for the popular game of chance, has officially announced 15 events for its 2020 run. The festival will play from Tuesday, May 26 straight through to Wednesday, July 15th. The powers that be are pulling out all the stops and this year’s WSOP will be one of the biggest to date. The whole affair will be hosted by the Rio All-Suite Hotel & Casino with plenty of attractions for both recreational and professional players.

The schedule was revealed right before the holidays so prospective attendees could go ahead and make travel plans. The 15 announced events include Monster Stack, Main Event, BIG 50 No-Limit Hold’em, Super Seniors, Colossus, Ladies No-Limit Hold’em, Tag Team, Crazy Eights, and Millionaire Maker. According to Jack Effel, WSOP’s acting Vice President, there is more to come. Several unannounced events are still being organized to flush out 2020’s schedule. Executive Director of WSOP Ty Stewart expressed excitement for the oncoming year. In a recent statement, he said, “We cannot wait for summer so we can open our doors and welcome poker players from across the globe.”

2019 was already a big year for the World Series of Poker. The festival was a record-breaker and generated over $290 million dollars in prize money. Over 180,000 players entered the contest which was also held at the Rio. WSOP for 2020 will be just as prestigious and rich. The Main Event will once again be the key fixture and will require a $10,000 buy-in just to play.

The Main Event is just as its name describes. It is a contest that every poker player marks on their calendar. It is always exhilarating and features the best players in the world. The high stakes event will play out in three flights. The first of which will occur on Tuesday, July 1st. The other two flights will occur on July 2nd and 3rd respectively. Players who manage to survive Tuesday and Wednesday’s flights will compete for day 2 on July 4th. Survivors of Thursday’s flight will play again on Sunday, July 5th. All the threads will then combine on July 6th where they will be steadily be eliminated until the final on Friday, July 10th. As always the final table of the Main Event will be featured on ESPN/ESPN2.

Last year’s Main Event made some history as the first non-American player since 2014 walked away as the winner. Hossein Ensan won a cool $10 million in a heads-up with Dario Sammartino. In addition to the Main Event, 2020’s WSOP will also mark the return of the BIG 50 No-Limit Hold’em event.

The BIG 50 was a popular feature of 2019’s WSOP. Once again it will hold court as the event’s major opener. BIG 50 will play out over WSOP’s opening weekend in a series of four separate flights. The contest will begin on May 28th. Players have to satisfy a $500 buy-in and will receive 50-minute levels and 50,000 chips. The BIG 50 earned the title of the largest live poker tournament of all time last year. It had over 28,000 participants and paid out over $1.4 million dollars in prize money. Femi Fashakin walked away as the winner and recipient of the year’s first gold World Series of Poker bracelet.

Another signature event announced for 2020 is the $1,000 Seniors No-Limit Hold’em Championship. The contest is only for players 50 and up. It is a single re-entry tourney. Last year’s event saw Florida financial advisor Howard Mash walk away with the bracelet. He won an impressive $662,594 payout after defeating a stacked field of close to 6,000 players. The final heads-up pitted Marsh against Jean-René Fontaine.

2020’s WSOP does contain a few minor differences. All of the announced events so far are returning with no new faces showing up. However, there are some notable changes to take into account. The biggest concerning this year’s Tag Team. Introduced in 2016, Tag Team has included teams of two and four players. This year’s WSOP has finally made the distinction that teams of only two will be permitted to play.

Small changes have also been made to event starting times. The BIG 50 and Seniors events, for instance, have earlier starts. The Casino Employees event and the Closer have later starts. WSOP has also altered the structure of Crazy Eights. 2019’s contest had 30-minute levels play out on the first day followed by 60-minute levels continuing on after that. 2020’s WSOP has reduced these continuing levels to 40 minutes.

WSOP has also altered some dates for their more popular events. As the schedule is still being finalized all dates are still subject to change. However, most will stay close to what has already been announced. One thing is for sure, however, this year’s WSOP will hold nothing back. So poker players prepare because 2020’s WSOP will definitely be one to talk about for quite some time.